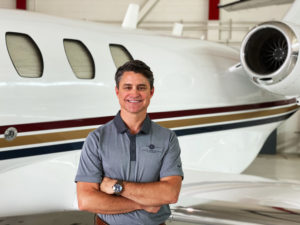 Chad began his professional aviation career in 2001 when he became a demonstration pilot and salesman for the Pilatus PC-12, however, his relationship with aircraft started much earlier. Chad was born into a family of aviation enthusiasts, with a grandfather who owned dealerships and an FBO in the 1940s. As a result, Chad has been passionate about aviation for all of his life.

By 2020, Chad has seen a well-rounded aviation career with a vast knowledge of piston and turbine aircraft across a wide range of product lines. Through his career as a sales director and demonstration pilot, Chad has worked with Pilatus, Cirrus, and Daher Aircraft (TBM) and has been responsible for selling over $275MM in business aircraft. However, on top of his extensive product knowledge, Chad’s personal achievements speak for themselves. Chad has flown over 5,000 hours of flight time in over 40 different aircraft models, he holds single and multi-engine rating, Instrument Flight Rating, and has even type-rated in the ECLIPSE 500 light jet aircraft.

Chad is an Auburn University graduate currently based in Denver with his two young children. In his free time, Chad enjoys spending time with his kids, adventuring outdoors, fishing, hunting, and snow skiing.

We know that Chad will be a great addition to the LMA team, and he can’t wait to get started! When we asked him what his favorite part of his new role was, Chad quickly said that he “loves building long-term relationships with clients and assisting them with purchasing the aircraft that best fits their needs.” With Chad’s knowledge and experience, you can count on him to help you find your perfect aircraft.