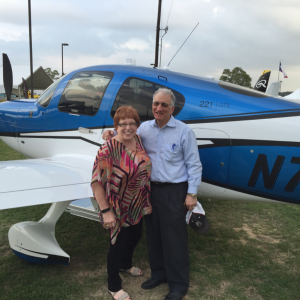 When it comes to hobbies, Texas Attorney Bob Miller has one obvious go-to: flying.

Bob and his wife Mary have been married for 37 years and have spent much of that time in the air. One of their goals is to visit all 14 presidential libraries, and thanks to the Cirrus life, they are close to the finish line. The couple was recently featured in the March edition of COPA Pilot magazine, where they share a trip they took in their 2016 G5 SR22T. Visiting a new state almost every day, the Millers touched down in Arkansas, Ohio, New York and Tennessee, before heading back home to Big Spring, Texas.

The attorney has owned six aircraft himself, and before that, co-owned three with business partners. He fell in love with flying during his sophomore year of college after taking his first lesson. Miller went on to finish his undergraduate degree, and half of law school when he enlisted in the Navy during the Vietnam war.

In the Navy, he worked as a lineman on an aircraft carrier, taking care of F4 fighters. While on the carrier, he spent a lot of time with the pilots and their planes, dreaming of the day when he could lift off in a plane of his own.

After the war, Miller completed law school and moved to Big Spring in 1977 where he ended up co-owning various aircraft. He eventually bought out his share of a Cessna 182 and decided he would remain a sole-owner from that point forward.

Miller came into contact with Lone Mountain Aircraft in 2009 when he looked to upgrade his 2003 Centennial SR22 to a 2007 G3 Turbo. He got in touch with LMA salesman Paul Sallach, who went with him to evaluate the Turbo and ended up quickly helping him acquire it, while simultaneously selling his Centennial.

The experience was the start of a great relationship between the Millers and Lone Mountain. In 2013, Miller once again reached out to Sallach and acquired a 2013 G5 SR22T. He loved the aircraft so much that he couldn’t resist when Cirrus released the 2016, and once again Sallach helped in the selling of his ‘13 and the purchasing of his new bird.

Now, the Millers are anxiously awaiting their July delivery of a new 2019 G6 SR22T.

According to Miller, he continues working with Lone Mountain because he is impressed with the quality of service and the team members.

“Paul knows how to take care of his clients and their aviation desires,” said Miller. “He’s very patient with the whole process and takes the time to listen to exactly what his clients desire in an aircraft purchase. If you have a plane, Lone Mountain is going to sell it. Mark and Paul will work with you whatever your circumstances may be.”

As an attorney, husband, father and grandfather, Miller looks at personal aviation as a way of cutting down on travel time and being more present with his family. It also provides greater independence. In Miller’s opinion, flying himself increases his quality of life and takes the stress out of traveling.

“Mary and I are able to fly to many locations that commercial flights won’t fly to, as well as stay as long as we desire, without having to plan months in advance. When it all comes down to it, I know I can drive or go commercial. But we just like to fly.”

Our team of pilots loves helping other pilots along their personal aviation journey – whether it’s for business or pleasure. Contact us today if you are interested in upgrading your aircraft.

To read more about the Millers’ love for aviation, read the March edition of COPA Pilot.