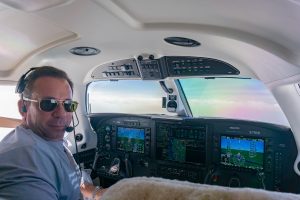 When Bob Marini, a home builder and real estate developer in upstate New York, began expanding his business to the Palm Beach, Florida area, he realized traditional travel between states wasn’t going to cut it. Bob needed an aircraft and soon acquired a Cessna Citation V Ultra. After riding in the personal plane a few times, he quickly took an interest in becoming a pilot himself and received his private license in 2014.

“For me, flying is an escape,” said Bob. “When I’m up there, I can leave everything else behind and take a mental break from the stresses of work. It’s something I truly enjoy.”

It didn’t take long for flying to become Bob’s greatest hobby. Gradually upgrading through a few piston aircraft over the next few years, he finally decided it was time to step up to a turbine aircraft and go faster and farther. In 2018, Bob purchased a Piper Meridian 500TP.

Enjoying his new capabilities, he began the search for an aircraft with even greater range capability that would allow him a larger payload.

It was during this period that he had his first encounter with Lone Mountain. Noticing a listing posted for a Piper M600 this past Spring, Bob contacted LMA Salesman Gordon Ramsay for more information. He soon decided to trade in his Meridian for the M600.

“I love everything about the M600. It has great fuel capacity, flies stable and feels heavy. And of course, the G3000 is amazing.”

Although Bob no longer spends much of his time flying for business, he speaks at length about the impact of private aviation on his personal life.

“It’s all about time. Monica and I have five children, between the ages of 18 and 30, so time is really important to us. When our son went to college in Rhode Island, he played division three basketball, with most of the games being five hours away or more. I was able to make them in about an hour. Having the M600 allowed us to see every game, which is something we wouldn’t have been able to do otherwise.”

Bob also uses his aircraft to help those in need through Angel Flight, a nonprofit that arranges free air transportation for people who need to travel to receive lifesaving medical treatment. So far, he has fulfilled over 30 missions since he began volunteering with the organization in 2016.

“It can feel like you are running a time machine. Working with Angel Flight really gives you a reason to be up in the air.”

According to Bob, Lone Mountain is a valuable partner in aviation.

“Everything in aviation is built on trust and Lone Mountain has proven trustworthy,” said Bob. “They followed through on every promise they made to me when purchasing the aircraft. Gordon has been diligent and helpful with anything I’ve needed following my purchase. I would certainly recommend Lone Mountain to anyone considering stepping up.”

Our team of pilots at LMA enjoys helping clients find their ideal aircraft. Whether you are buying your first plane or looking to upgrade, we’d love to help you find the perfect fit for you. Contact us today if you are interested in learning more.